What is the Cloudogu EcoSystem?

The Cloudogu EcoSystem is a platform that gives development teams the freedom to decide when and where they develop software. To do this, each service and tool is deployed as a so-called dogu and automatically aligned and configured. As a result, the Cloudogu EcoSystem holds a number of benefits for software developers: 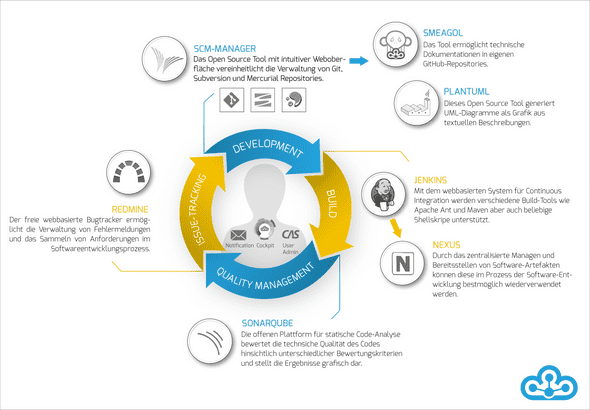 The Cloudogu EcoSystem has been developed with a constant eye on current security standards. The strict use of SSL to encrypt connections and the encapsulation of each Dogus in containers as well as the encryption of security relevant configurations are just a few of the measures that have been incorporated into the design.

Excerpt from the security measures:

The Cloudogu EcoSystem is based on a Linux image provided for various virtualization environments. The installation can be done manually via a browser or automatically via a parameter file, which installs the dogus realized as Docker containers. The individual containers are configured centrally via specially programmed middleware. The images or versions of the Dogus can be deployed both online and "on premise" as a mirror, so that no Internet connection is required.